Established during the time of Louis XIV, the Opéra Comique is one of the oldest theatrical and musical institutions in France. Its repertoire primarily consisted of pantomimes and opera parodies, thwarting the prohibitions that affected its performances as a result of a lawsuit that was filed by the Comédie Française, who were concerned that its performances constituted direct competition. Nevertheless, in 1714 the troupe was authorised by decree to have its own theatre, on the condition that spoken dialogue was inserted between the songs. 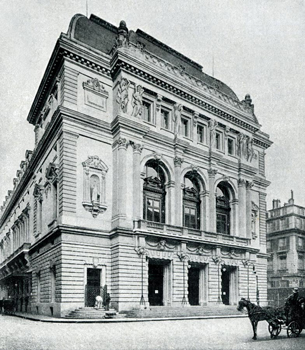 The musical genre of 'opéra-comique' is the genre of performances given by the Opéra Comique. 'Comique', or 'comical' doesn't mean that the stories are supposed to be funny but that pieces of song are integrated with spoken theatre. In this way, opéra-comique differentiates itself from opera, which is completely sung.

The théâtre national de l’Opéra-Comique, also known as the 'Salle Favart' after the famous author of librettos for the opéra comique Charles-Simon Favart, is located on Place Boieldieu. Inaugurated in 1783 in the presence of the Queen, Marie Antoinette, a fire caused by the heating system destroyed the Salle in 1838. In 1840, the Salle Favart was rebuilt. Unfortunately, in 1887, another fire, caused by a defective gas light above the state, once again destroyed the Salle during the first act of a performance of the Operetta 'Mignon'. After the fire, electric lighting became obligatory in all theatres and cafés-concerts. The Salle was once again rebuilt by the architect Louis Bernier and inaugurated in 1898, after eight years of reconstruction, in the presence of the President of France, Félix Faure. It can hold approximately 1,255 people. 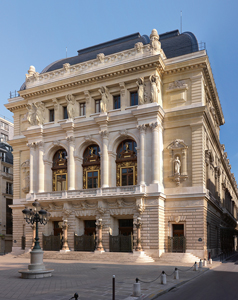 Architecturally, the Opéra Comique is often considered to be equivalent to the Opéra Garnier but on a smaller scale. The performers appreciate its 'human' dimension, which brings them closer to the audience.
After its bankruptcy in 1932, the Opéra Comique was combined with the Opéra under the same management (Réunion des Théâtres Lyriques Nationaux) and in 1939 became a branch of the Opéra de Paris. In 1990 it once again became independent and was successively directed by Thierry Fouquet, Pierre Médecin, Jérôme Savary (2000 -2007), and Jerôme Deschamps (2007-2015). It is currently directed by Olivier Mantei. Since 2007, the Opéra Comique has rediscovered its vocation as an operatic house, staging Baroque masterpieces ('Atys', 'Pelléas et Mélisande'), mythical works created in-house ('Carmen', 'Lakmé'...) and, above all, exhuming its historical repertoire: the opéra comique and the operetta. These whimsical pieces primarily seek to entertain and have often been forgotten over time: 'Mârouf Savetier du Caire', an immense success during the interwar period with 2,000 performances, or 'Ciboulette', during which the audience were invited to sing along, or even 'Les Mousquetaires au Couvent', an operetta by Louise Varney from 1880...